In 2010, Stuart Archbold appeared on Dragons' Den offering 10% equity for £250,000. They nearly secured £1m for 45% equity from Peter Jones. But, this was only when Peter realised that their SHOPBOX was patented. 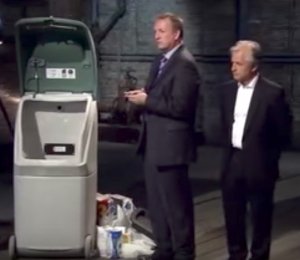 The SHOPBOX is a lockable, chilled container, disguised as a Wheelie‐Bin. Now, if they had patented the disguise, I would have bought it. But, they didn't. I keep thinking: "bar fridge"; and wondering: "what's new?"

"You can't possibly have a patent … you have nothing … you have a piece of paper, which is completely and utterly worthless."

"He has got a patent for a container of goods to be held outside in a domestic environment for a chilled product."

Duncan had stuck his neck out; Peter sat triumphant; and Duncan skulked away. But, who was right?

"Shopbox, a patented concept, was borne as a solution for the unattended delivery of groceries and parcels. It was designed so that customers wouldn't need to be at home to receive their deliveries, and so that delivery companies didn't need to stick to time inflexible slots, leaving them to focus on finding the most efficient and cost effective delivery route."

What was this patent that motivated Peter to value the company at over £2million?

Status: Granted and in force.

A storage container for receipt of delivered goods at a premises comprising a variety of goods which may be required to be stored at any of a range of ambient, chilled or frozen conditions, said storage container provided with securing means to secure delivered goods in the container interior, said interior accessible by the deliverer of said goods to allow the goods to be placed therein and by the intended recipient to allow removal of said goods at a selected time thereafter and wherein said container is provided to be located adjacent the premises and can be secured to prevent unauthorised removal, and said container interior is adaptable to allow the provision of a plurality of compartments, to allow said goods to be stored in select ambient, chilled or frozen conditions.

When determining whether the combination of features in a claim is "new" (i.e. one of the requirements for a valid patent), we should ignore "for" statements ‐ similar to how we'd tune‐out hollow marketing speak, e.g. "Brylcreem: for the hipster in you". Doing so, distills this claim to the following features:

I am still not seeing the difference between this combination of features and: a tethered cooler box; or a bar fridge plugged into an electrical socket. The patent examiner must have returned from an extraordinary bender. Peter was correct: ShopBox has a granted patent; but I agree with Duncan.

Over the next 5 years, ShopBox tried unsuccessfully to extend their patent portfolio beyond England, with all three attempts encountering temperate examiners, and failing to proceed to grant: 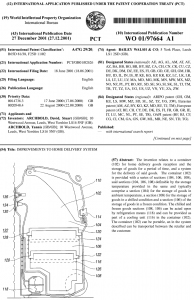 Claim 1: A storage container for receipt of delivered goods, at least some of which are perishable, said container having at least one cavity in which the goods are placed, a lid for the closure of the container and a locking mechanism to maintain the lid in a closed position until opened by an authorised person and wherein the container is provided for the reception of goods at a point of delivery to a customer, said container including in the cavity, reception means for the goods to allow the same to be selectively stored in the same and selectively in one of a plurality of distinct sections selectively defined by the customer within the container, said sections, if defined, distinguished by the differences in temperature between the same and wherein said sections are positioned with respect to each other within the container with the number and size of the respective sections selected by the customer selecting the positioning of one or a number of partitions in the container. 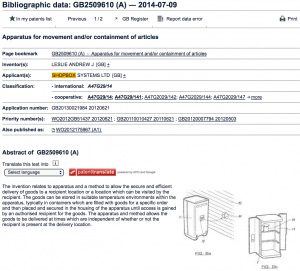 Think: any packaged foodstuff in your fridge; cans in a bar fridge; … Next time, consider claiming: a thingamajic including a "thingy" and a "majicy". 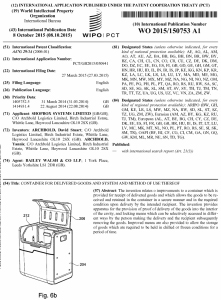 Claim 1: A container system, said system including at least one container, access to the inside of which is controlled by one or more lock means and said system including at least one delivery verification means wherein said delivery verification means includes one or more of a scanner, image capture device, weighing scale to verify the placement and/or presence of one or more articles within the interior of the container.

After spending more than £2,000,000 developing and protecting their container, ShopBox only has GB2332095 to shield it from copycats. This patent has no force outside England, and these tenuous English patent rights expired on 11 January 2019 ‐ not quite a "dripping roast".